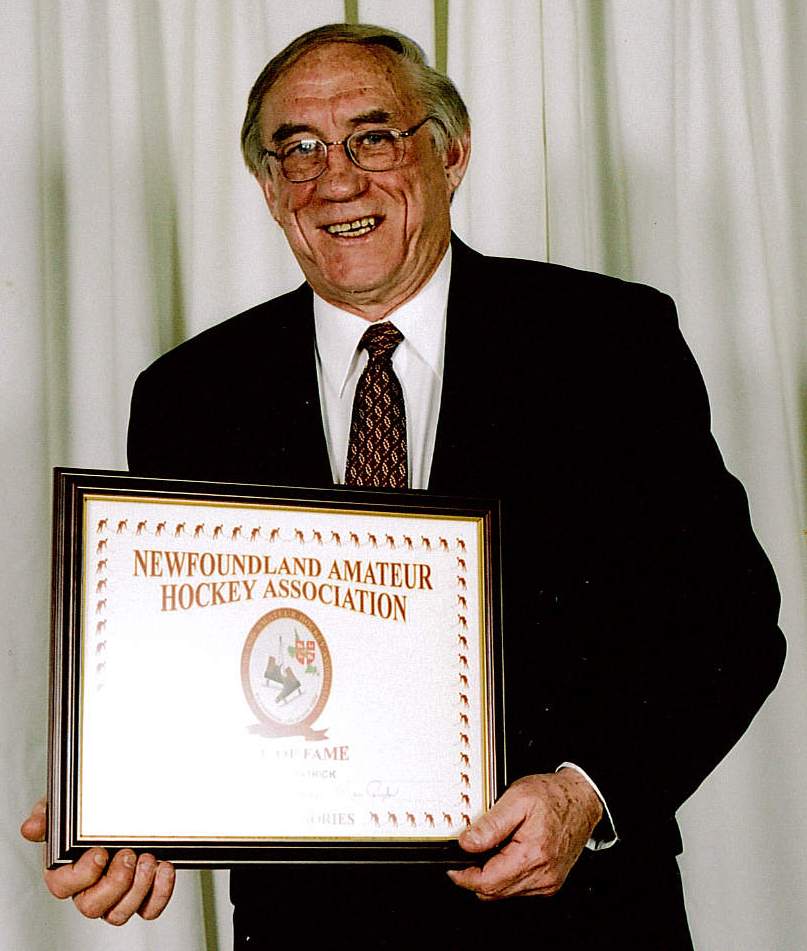 Bern “Mose” Fitzpatrick was a major factor in four of the provincial senior teams with which he played winning the Herder Memorial Trophy and the provincial senior championship. He provided great leadership, on and off the ice, to the four clubs and always demonstrated a Great Spirit and desire to playing winning hockey.

A graduate of Bell Island minor and school hockey, he was one of a large number of very talented players who made lasting influences on provincial hockey and showed the value and success that Island players brought to hockey teams. He was an exceptional model of just how hockey should be played.

A strong skater, fine stick handler and unselfish passer, Bern Fitzpatrick was a standout as a very determined forward or, when necessary, a very effective defenseman, especially in his own zone. He was very capable of providing the teams with which he played whatever they required at any time.

His size and strength, along with his overall hockey skill, made him extremely effective in front of the goal, his own of the opponents, along the boards and in the corners. He was an excellent face-off player.

His record for nine seasons of provincial senior hockey, between 1960 and 1973, reveals his value as a hockey player. He skated with the Conception Bay CeeBees to Herder titles in 1961 and 1967 and repeated this accomplishment with the St. John’s Capitals in 1970 and 1973. He was also a prize member of the Gander Flyers and the Bell Island Miners provincially and was picked up by the Grand Falls Cataracts for the 1971 Allan Cup play.

At the senior provincial level, he played more than 300 games in the regular seasons and the playoffs, collected 249 points from 113 goals and 136 assists and was called for 238 penalty minutes in regular schedule games. In four Allan Cup seasons, Bern Fitzpatrick had 11 points from six goals and five assists.

He spent the 1967-68 season with the Salem Rebels racking up 43 points from 19 goals and 24 assists, in the Eastern Hockey League and played several games for Woodstock Athletics of the Ontario Senior Hockey League during the 1968-69 season.

In addition to his outstanding performances as a player, Bern Fitzpatrick owns many years of vital contributions to Bell Island Hockey. During the mid 1960’s, it was his business savvy and his dogged determination that not only made certain that the Monsignor Bartlett Memorial Arena remained open but that it was refurbished and improved. It is very doubtful that any level of hockey would have operated on Bell Island during this period without his contributions.