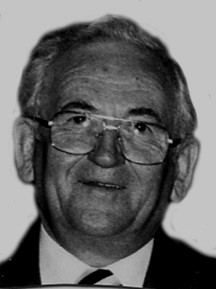 For nearly 40 years the late Charlie McCarthy worked on a regular basis, in a variety of positions, for the good of hockey within Newfoundland and Labrador. While Western Newfoundland benefited most from the efforts of the Carbonear native, hockey in general is better today because McCarthy was dedicated to the sport and backed his feelings up with action. He was a classy hockey worker.

An outgoing, always happy individual who interacted extremely well with other hockey people, McCarthy played a prominent role in everything from minor hockey in 1968 to the establishment of the provincial Hockey Hall of Fame in 2000. Well known to a very large number of people, he utilized his contacts to realize objectives that added to the overall hockey situation.

Living in Deer Lake, McCarthy was one of those responsible for founding the town’s minor hockey organization in 1968. He served in many executive positions for several Deer Lake hockey groups and became associated with intermediate hockey in 1976 and held the provincial intermediate vice-president’s position for 19 years. This was in addition to coordinating provincial minor championships in Deer Lake for 29 consecutive years.

He coordinated the 1985 national Allan Cup playoffs in Corner Brook, the 1984 national Hardy Cup playoffs in Port aux Basques and the 1993 and 1994 Air Canada Cup playdowns in Corner Brook. His work and dedication was such that he received the Newfoundland and Labrador Hockey Association Gold Stick in 1984 and the Canada Amateur Hockey Association outstanding service award in 1993.

A great deal of the good things that have occurred within provincial hockey since 1968 involved McCarthy. He was well respected and well liked by the hockey community.