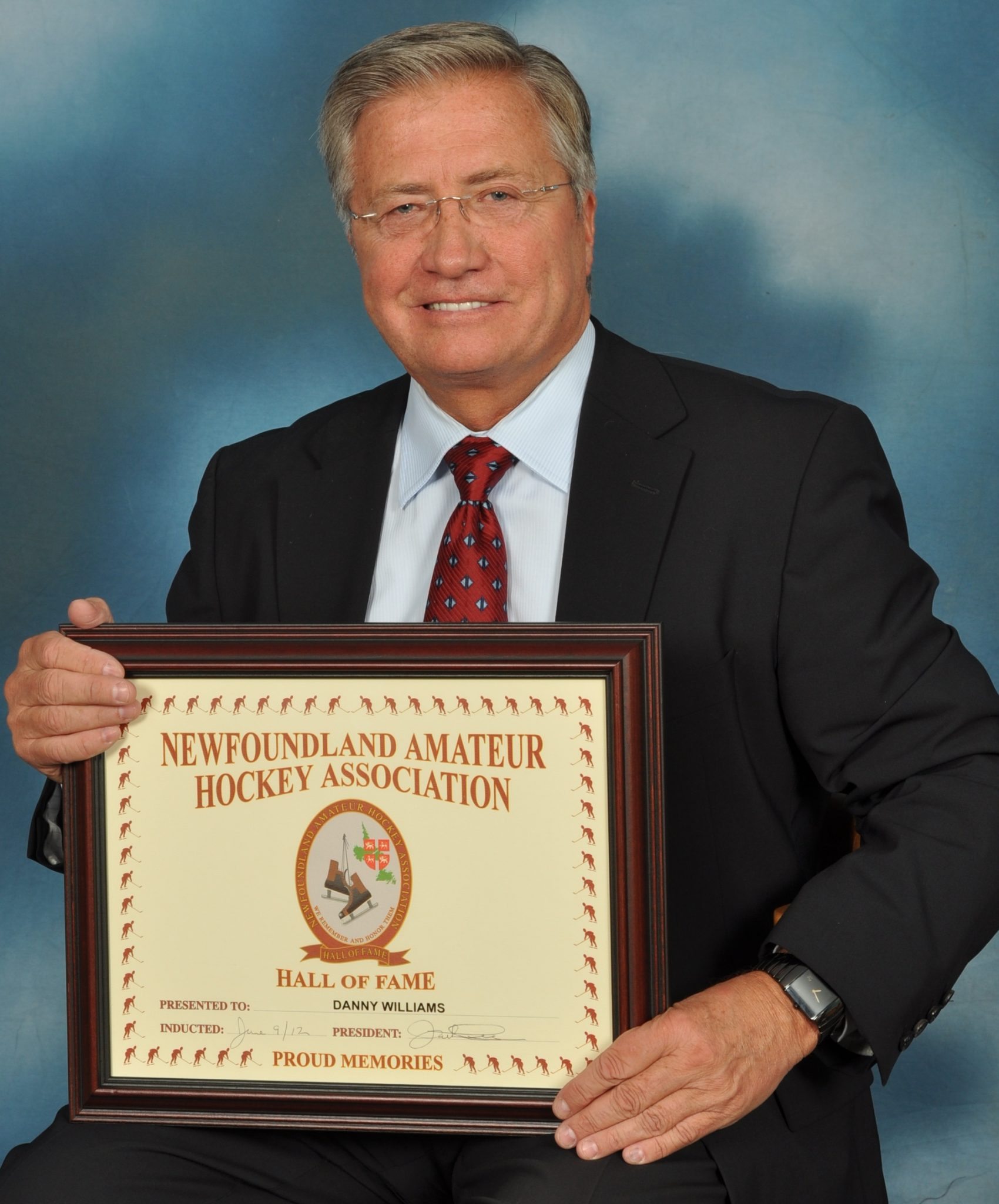 The outstanding contributions by Danny Williams have been extremely valuable and extremely important to hockey within Newfoundland and Labrador, and especially beneficial to hockey on the Avalon Peninsula. With personal and team success as a player, to tremendous success as an organizer and promoter, he has played a major role in a wide range of hockey activities.

As a better than average player, he enjoyed rewarding success within St. John’s Minor and high school prior to leading St. Bon’s to the St. John’s junior championship as team captain. His love for hockey is still demonstrated as he regularly participates in recreation hockey.

With the St. John’s pee wee and bantam all-stars he won provincial minor hockey championships and continued winning with the Gonzaga High School teams and the St. Bon’s junior club. He earned a berth on the Memorial University junior varsity team.

He coached the Gonzaga junior club and for five seasons was a working member of the coaching staff that led the St. John’s Capitals to the provincial senior title and the Herder Memorial Trophy. He coached the Caps to three St. John’s junior hockey championships.

He made his earliest major contribution in 1979. The St. John’s Junior Hockey League came into being in 1955 with the opening of St. John’s Memorial Stadium, and continued to operate until 1976 when it failed to open and left the area surrounding the City without a junior league or opportunity for young hockey players to participate in good competition.

It was during the summer of 1979 that Williams came into action. He organized a meeting of hockey people, caused a new junior league to be established and agreed to serve as its president. There was a junior league for players in the St. John’s metro area for the 1979-80 season, thanks to the leadership of Williams. The league continued into 2011-2012.

He continued to work hard for local hockey as a driving force behind bringing the St. John’s Maple Leafs and the American Hockey League to St. John’s. He served long and well as a member of the board that ran the Maple Leafs for 14 years and played an important and continuing role in the many projects that produced hundreds of thousands of dollars for a wide range of very worthwhile charities.

The construction of the state-of-the-art Mile One Stadium was completed with Williams playing a major role in all aspects of obtaining the much needed facility. His leadership and influence were vital in obtaining the excellent facility for the province.

When the Maple Leafs, despite plenty of success, were pulled out of St. John’s and an effort to present a Quebec Junior hockey club failed, Williams was available and moved back into efforts to have the American Hockey League play back in Newfoundland and Labrador.

He took advantage of his reputation and leadership ability to obtain an AHL franchise for the province and the highly successful Ice Caps moved into Mile One, playing great hockey in front of full houses. It was the determination, prestige and overall leadership of Williams that was the moving force behind the Ice Caps coming to this province.

In every aspect of his hockey involvement, Williams has been prominent as a beneficial influence and overall has excelled as a force for hockey good.