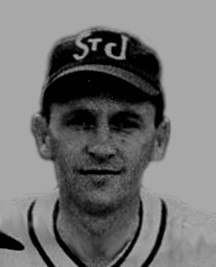 Hugh Fardy was an exceptional athlete who starred in a wide range of sports, with hockey being his best. After an impressive school showing, he embarked on a senior hockey career that lasted 25 years and was overflowing with individual and team accomplishments.

Extremely intelligent, he engineered plays from his defence position much like a quarterback in football, and was especially effective on power plays or when killing penalties. As a team captain, he provided exceptional leadership for any team of which he was a member.

At the provincial senior hockey level, Hugh Fardy was a member of five St. Bon’s teams that won the Herder Memorial Trophy from 1945 to 1949. On five occasions he was captain of St. Bon’s and, when the Capitals represented St. John’s in provincial competition, he captained five Caps teams. His ability was of such a high calibre that he was able, for several seasons, to fill the most difficult position of playing-coach.

Inducted into the Newfoundland and Labrador Sports Hall of Fame in 1986, Hugh Fardy was a perennial all-star in baseball, basketball, soccer and track.