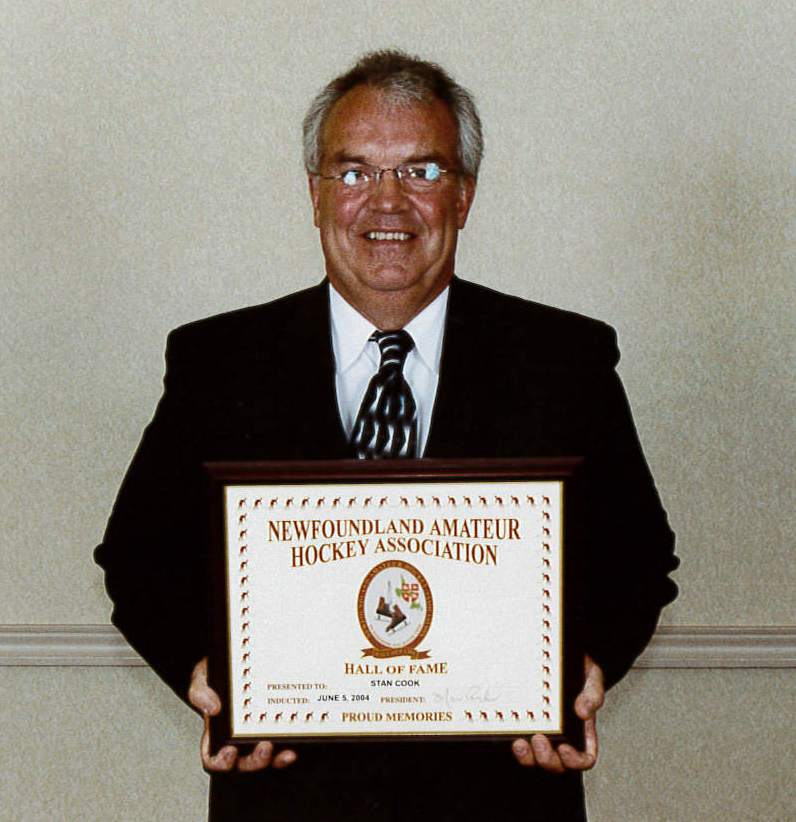 Great skill, exceptional knowledge of the game and dedication to the sport highlighted the 32-year hockey career of Stan Cook as a player, coach, administrator and instructor.

With a talent that was built on his great skating ability, Cook earned universal respect from teammates, opponents and fans from his minor hockey days in St. John’s through his three seasons in mainland university competition to his Herder Trophy achievements with Gander and St. John’s to his Brother Rice coaching to his hockey school organizing efforts.

In 1974 he played a major role in the re-establishment of the St. John’s Junior Hockey League and that League continues to be a solid operation to the present. A newspaper poll for selection of St. John’s all-time all-stars had Cook voted to the second team defence.

A strong skater with both quickness and exceptional agility, Cook ranked highly with the very best of his day. He continually demonstrated his all-star hockey caliber and this ability was very evident during every aspect of his career. He was a delightful hockey player. Leadership was an obvious quality he brought to hockey. Often elected captain, always willing to provide advice and generally providing inspiration and all out efforts in each and every game, he led both on and off the ice. Cook excelled as a player, as a coach hockey administrator and as a hockey school instructor. He knew and loved the game of hockey.

His hockey career started in 1956 as a member of the championship peewee team in the St. John’s Minor Hockey Association operated by Branch One of the Royal Canadian Legion. The St. John’s peewee all-stars won a 1957 tournament in Goderich, Ontario and had a brief appearance on the Ed Sullivan Show in New York; he was a valuable member of the team.

In 1961, Boston Bruins chief scout Harold Cotton invited Cook to a tryout for the Niagara Falls Flyers. Bruins’ coach Milt Smith offered him a contract with the junior club. After three weeks with the Flyers but with no schooling, he returned home to continue his education.

He won the St. John’s MVP award and scoring title in the 1962 St. John’s Junior High School Hockey League playing with Brother Rice High. He played St. John’s Junior and Senior hockey with St. Bons in 1963. He was a member of the junior championship team and finished second in junior scoring. This was the season he played with St. John’s Capitals in provincial Herder Trophy play for the first time. Between 1964 and 1967, Cook was a valuable member of the St. Francis Xavier University varsity hockey team in Atlantic Intercollegiate play. He was twice selected for league all-stars, finished second in scoring from his defense position and was voted top defenseman. In his final season his team finished second in Canadian university hockey. Selected as an all-star defenseman he played a major role in Gander’s 1968-69 provincial senior Herder Memorial Trophy title. His playing career closed in 1969-1970 when he was voted top defenseman for the S. John’s Capitals who won the Herder Memorial trophy and the provincial senior title.

From 1972 to 1974, he was convenor for St. John’s high school senior hockey and in 1983, ’84, and ’85 he was coach of the Brother Rice High School team that won the provincial championship and the Boyle Trophy each season. His coaching career included four seasons with St. John’s minor hockey. Drawing upon his in-depth knowledge of hockey, Cook operated a very successful annual hockey school for 20 years.