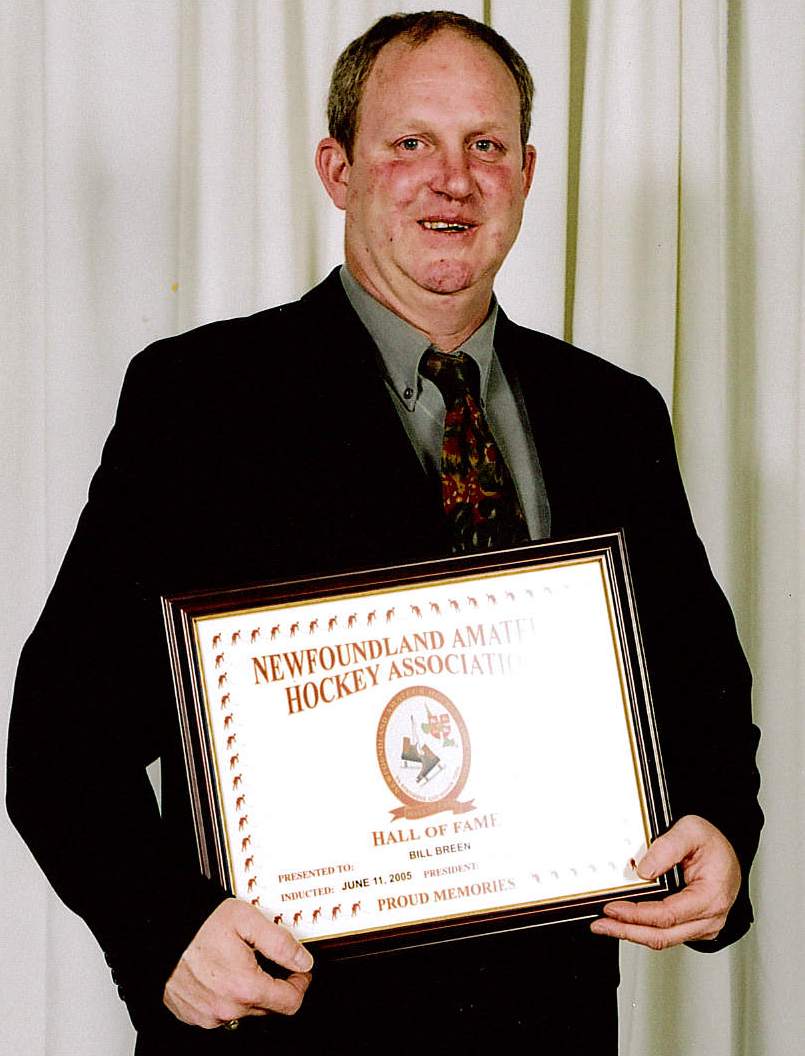 Bill Breen’s hockey credentials are extremely impressive and clearly demonstrate a career that was very successful and very rewarding. They established Bill Breen as one of the finest hockey performers to be developed locally and one of the finest players to represent Newfoundland and Labrador in outside competition during the era in which he played.

A solid defensemen with strong skating ability, he was a great gift to goalies that played on the team for which he performed. Often at his very best in physical game, Bill Breen used his size to good advantage, especially in a defensive manner.

Especially effective in front of his own goal, he also stood out along the boards and in the corners, guarding his area of the ice with a personal determination that was of great advantage to his team. Bill Breen was a big, strong defenseman with sure skating ability and a natural talent to “see the ice” very well.

Bill Breen started his 23-year hockey career with the Kilbride minor hockey operation in 1968 and continued with the St. John’s Minor hockey Association. He won several individual awards, played with several championship teams and was a perennial all-star selection during a rewarding minor career. This situation continued as he moved through elementary school with St. Pat’s.

He was one of the better players for Newfoundland and Labrador at the 1979 Canada Winter Games in Brandon, Manitoba and starred for two seasons of St. John’s junior hockey.

His 11-season provincial senior hockey stint started with two games with Labatt’s Blue Caps in 1976-77 and concluded with 21 games with the Mount Pearl Blades in 1987-88. It overflowed with success.

He finished his provincial senior hockey career with 25 goals and 81 assists for 106 points with more that 600 minutes in penalties. Statistics on his plus-minus and great defensive play were not recorded during his career.

Bill Breen is one of the best hockey players within Newfoundland and Labrador from the mid-1970’s to the late 1980’s. He was equal to any other defenseman of his time and provided important valuable contributions to the various teams with which he played.