BOUCTOUCHE, N.B. – The Grand Falls-Windsor Cataracts went undefeated on their way to becoming the 2017 Allan Cup champions, besting the Lacombe Generals 7-4 in Saturday’s final. This is the third time in tournament-history that a team from Newfoundland and Labrador has won the Allan Cup (2011 – Clarenville Caribous; 1986 – Corner Brook Royals).

“I’ve been fortunate to win a few championships in my day, but this is a special one,” said Cataracts’ head coach Tom Coolen, who coached the Latvian team at the 2014 Olympic Winter Games in Sochi, and has held coaching roles in the QMJHL, AHL, and with the Buffalo Sabres of the NHL. “I’m really happy because I know what it means to Grand Falls, I know what it means to Newfoundland, because they have waited a long, long, long time for it. And now they’ve won it and it’s just wonderful. It’s like when the Red Sox won the World Series – it’s just wonderful.”

The Allan Cup, Canada’s National Senior Championship, is one of the oldest club-team hockey competitions in North America, having been first competed for in 1908.

The Generals – who have appeared in eight Allan Cup finals since 2008 earning three titles, including at the 2016 Allan Cup as the Bentley Generals – took an early lead on a goal by Evan Oberg at 9:07 of the first period. The Cataracts responded with goals by Colin Circelli and Stuart MacRae, and the teams retired to their respective dressing rooms with the Cataracts holding a 2-1 lead after the first.

MacRae, Matthew Stefanishion and Matt Bragg would add one more goal apiece in the second period, before the Generals got one back by Eric Galbraith in the second frame.

Circelli added his second goal for the Cataracts before Chris Rauckman and Teegan Moore scored for Lacombe in the third, but they were unable to catch the team from Atlantic Canada. MacRae added an empty-net goal with 24 seconds to go in the third to complete his hat-trick.

“I think the talent just gets better and better every year here,” said Stafanishion, who won with the (then) Bentley Generals in 2016. “The compete… it’s unbelievable to have guys come in with everyday lives, and it’s just an incredible group of guys. Both teams were awesome tonight.”

The Generals’ goaltender Kraymer Barnstable faced 33 shots in the final, while the Cataracts’ netminder Bryan Gillis made 30 saves to earn the win.

For more information on the Allan Cup, please visit AllanCup.ca. 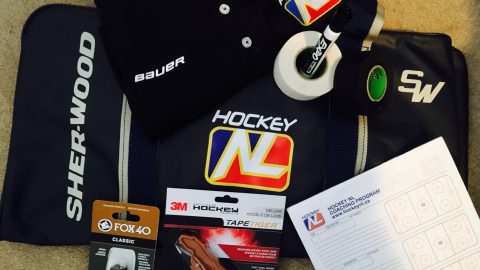 Hockey NL Introduces Coach of the Month for 2020-21