CALGARY, Alta. – Hockey Canada, in partnership with BFL CANADA, announced the first winners of the BFL Female Coach of the Year awards. Introduced as an international marketing partner in October 2019, BFL CANADA’s commitment is to focus on growth and development opportunities for women in the game, on the ice and behind the bench.

Through the program, one high-performance and one community coach from each province and the northern territories have been recognized, with a national winner in each category.

“Thank you to all the coaches for allowing our young girls and women to develop and reach their full potential in a positive and supportive environment,” said Barry F. Lorenzetti, president and CEO of BFL CANADA. “Thank you for investing your time and energy in their passion and their future – you are making a real difference in their lives by being such dedicated coaches. BFL CANADA is proud to be a part of this journey in making the future of women’s hockey brighter.”

An assistant coach with the women’s hockey team at York University since 2017, Hutchinson represented her country internationally as a player, winning gold with Canada’s National Women’s Team at the inaugural IIHF World Women’s Championship in 1990. She has been coaching since 1992 and has been involved in high-performance camps with the Ontario Women’s Hockey Association (OWHA) since 2014. Hutchinson won a gold medal as an assistant coach with Ontario Red at the 2019 National Women’s Under-18 Championship, in addition to bronze and silver as an assistant with Ontario Blue in 2015 and 2017. She was also the head coach of Ontario Blue at the 2016 tournament, and an assistant with Ontario at the 2019 Canada Winter Games.

Giving back to the game that has given her so much, Holmes-Domagala coaches her daughter’s teams with Girls Hockey Calgary, serves as director of coaching for Timbits U7, U9 and U11 with the organization and runs skills clinics in Calgary for young girls. The Mississauga, Ont., native played 10 games with Canada’s National Women’s Team, winning gold at the 4 Nations Cup in 2000 and 2004. After playing with the Brampton Thunder of the National Women’s Hockey League (NWHL), she moved west to join the Calgary Oval X-Treme of the Western Women’s Hockey League (WWHL), winning gold at the Esso Women’s Nationals in 2003, and co-founded the Strathmore Rockies (WWHL) in 2008.

A complete list of winners for each category by province and territory can be found HERE. 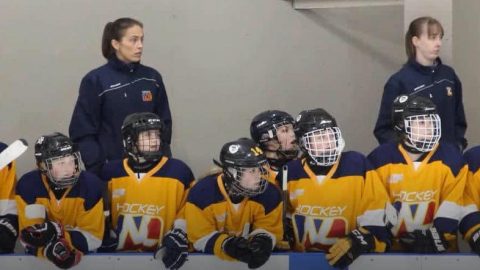