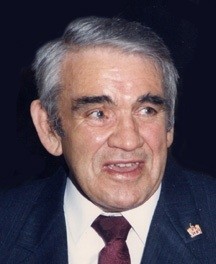 Terry Trainor’s hockey career involved tremendous success as a player, an official and a builder, and his overall contributions in all capacities were important aspects of the sport within Newfoundland and Labrador. The determination that he displayed as a tenacious defenceman was supplemented by his common sense and knowledge as a referee, and laid the ground work for his outstanding contributions as a coach, general manager and promoter of hockey, especially in St. John’s.

For nearly ten years, Terry Trainor was one of the most respected and dependable referees who officiated at all levels of hockey, especially on the Avalon Peninsula, earning the good will of players and fans alike.

As a general manager, Trainor led St. John’s teams to seven provincial senior championships and Herder Memorial Trophies, and to impressive performances in Allan Cup competition. For four seasons, he was general manager for both the St. John’s junior and senior Caps, with the clubs winning their respective division championships. He fulfilled the position of general manager for the provincial all-star team at the 1971 Canada Winter Games in Saskatoon, worked on international hockey with Don Johnson and Alan Eagleson, coached the Maroons hockey team in St. John’s intermediate hockey, and was a tower of strength in each and every capacity.

A tireless worker, a dedicated supporter, an excellent fund-raiser, and a conscientious and considerate leader in a wide range of hockey positions, Terry Trainor made extremely beneficial contributions to hockey within Newfoundland and Labrador.

He also served in executive positions for baseball and softball and was inducted into the Newfoundland and Labrador Sports Hall of Fame in 1988.