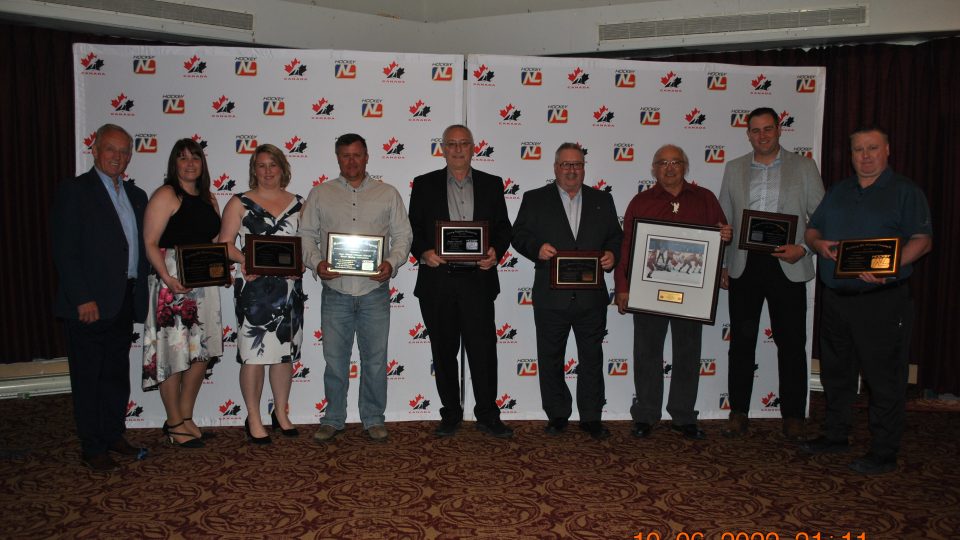 The recipient of the 2022 CJ McCarthy Memorial Award has been well known as the head coach of the St. John’s Senior Capitals since their return to senior hockey in the 2011-2012 hockey season. Over that period the team has known tremendous success with five league championships and two Herder appearances over his nine years behind the bench. His dedication is founded in a love of the game and the players who come out each year to wear the Senior Caps jersey.

* Accepting on his behalf is Joe Maynard, Eastern Director 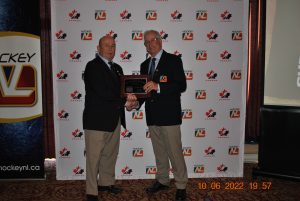 This year’s recipient has served as president of the CBR Junior renegades for 11 years.  From the early day of the organization in 2010 to still holding the position of president today.  He also serves as the team representative with the St. John’s Junior Hockey League. This is not all of his accomplishments. He owns and runs Micro Age Computers for the past number of years and sponsored the Junior team as one of the many Platinum sponsors the team. 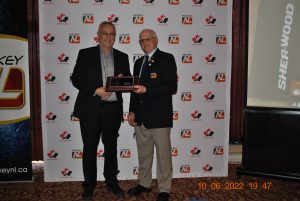 This year’s award winner has played an instrumental role in helping the coach, Michael Gambin, start the first ever U11 female hockey program for the Placentia Intertown Minor Hockey Association. As Parent Rep she works tirelessly to make sure everything runs smooth, the kids get to play games and the coach only has to focus on coaching. She leaves no stone unturned and is constantly seeking out opportunities for the girls and encouraging other girls to enroll. Because of her efforts and dedication, Placentia Intertown Minor Hockey had its first ever all female team attend provincials! 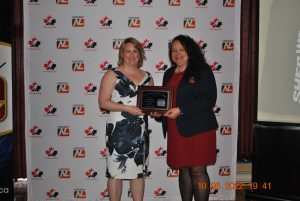 This year’s recipient has been  an active member in the hockey community for the past 20 years within the Gould’s Referee’s Association and Metro Referees Association and has been involved with officiating within our province for 22 years.  When not doing amateur hockey, he is a linesman in the ECHL. In the past, he has also been a part of leagues such as the AHL and QMJHL. 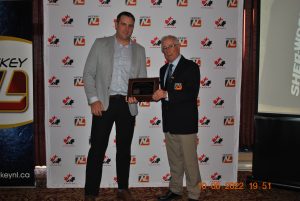 This year’s recipient has been an active member in the hockey community for the past 20 plus years in various areas of minor hockey and Hockey NL. Having first served with Mount Pearl. Then as Public relations for Hockey NL, Minor Chair of Hockey NL. And most recent as the President of Hockey NL for 10 years and currently Past President.  Over his time, Hockey NL experienced growth in all aspects of the game: participation in minor and female and numerous opportunities for skill development across the province and into Labrador. Always having the players in mind in everything he has done. His main message he would always preach in meetings is who we do it for, the players and coaches of Hockey NL. 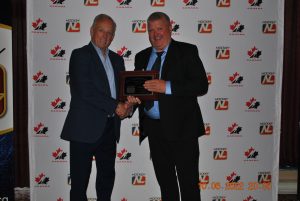 This year’s recipient has been involved in the Officiating Program for the past thirty (30) years. He started as an official in 1992 and was an on-ice official until 2019. He held the position of Referee in Chief for the Chanel-Port aux Basques Minor Hockey Association for twenty (20) years and then assumed the position of Western Zone Coordinator for the program. A position he has held for the past seven seasons. In this position he has been responsible for the coordination of clinics for the Western Zone.

This year’s recipient is a person everyone needs on their executive…. he took the helm as president of Channel Port Aux Basque Minor Hockey Association during a difficult time. With Covid-19 on our doorsteps, towns closing facilities during outbreaks, parents very concerned about player safety, and Hockey NL up-dating daily as the CMO made updates, he stayed very positive during all this and focused on keeping the players on the ice in a safe environment so they could play hockey.

* Accepting on his behalf is Morgan Anderson, Western Director Minor 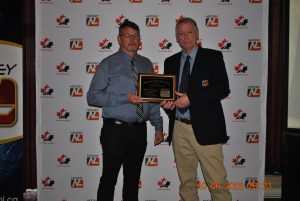 This year’s winner of the Minor Council Meritorious Award for the Central Region was involved in ensuring minor hockey players in Bay d’Espoir had a proper facility to showcase their talents.  After moving to St. Alban’s in 1996 for employment, her now husband was the manager of the local arena.  The arena at that time was dependent on cold weather and snow in order to produce ice.  Assisting with the development of proposals for funding to install refrigeration equipment, obtain boards and glass from the NHL Goals and Dreams program, construction of dressing rooms, installation of a hospitality/warm room, installation of a continuous-pour floor and a new Olympia ice re-surfacer, Gail has had a role to play in every facet of development of the Bay d’Espoir Rec Plex.

* Accepting on her behalf is Dean Ralph, Central Director Minor. 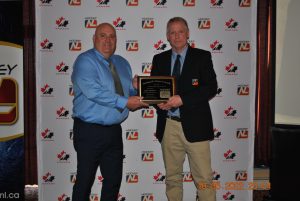 This year’s winner of the Minor Council Meritorious Award for the Northern Region has been actively involved in the Lake Melville Xtreme Minor Hockey Association for the last 13 years. Starting off coaching in the U7 division and working his way up to U18 in both the Minor and Female divisions, usually coaching in more than one division each season in house league as well as all stars.

* Accepting on his behalf is Shawn Brown, Northern Director Minor.

The recipient of the 2022 Minor Council Meritorious Award for the Eastern Region has been involved with minor hockey on the east coast for many years. He has been heavily involved with his local association as well as serving major roles in the Don Johnson Hockey League and the Doug Marshal Hockey League. 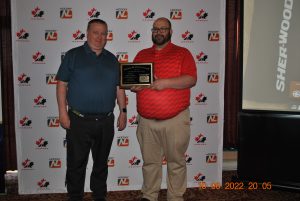 This year’s winner of the Minor Meritorious Award for the Western region has given her time to not only being a full time hockey mom to 3 sons but has also been dedicated to assist Corner Brook Minor Hockey to run a program that would benefit many children within the community.  She first began back in 2004 when her eldest son joined minor hockey.  You would see her at the rink day and night and always seemed to be part of the arena.  Her availability and commitment to the local association has been remarkable. She has a long list of organizing hospitality rooms for many tournaments, been part of many fundraising events, 50/50, chase the ace, bake sales, and have volunteered time in the Minor Hockey canteen. 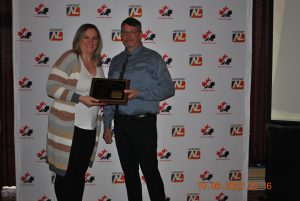 This year’s winner of the Minor Council Meritorious Award for the Tripen Region began her involvement with the Placentia Intertown Minor Hockey Association as a Hockey Mom in 2007 when her oldest child started and has been involved with their program ever since. She is a mom of 3. In 2014, she put her name forward for the position of Director on the Association’s executive and was successful. In 2016, she became elected as the associations President, a position she continues to this day. 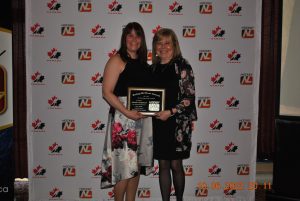 As a small association they have been impacted by Covid-19, but this past season saw them have 86 players registered, down slightly from pre-covid times. The executive is very involved in the association with most executive members having served in various roles for many years. They have a small but dedicated group of coaches and bench staff with most involved with multiple teams. They are hoping to attract more volunteers in the coming years to lessen the load. A concern for the association is their low numbers in their younger groups but they are planning several initiatives for the coming season to grow those numbers. 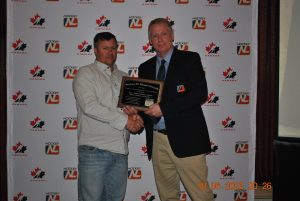 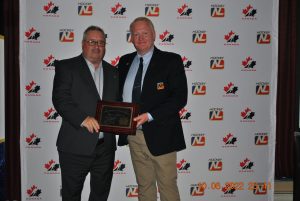 The following scholarships were also announced at our Annual Awards Banquet: