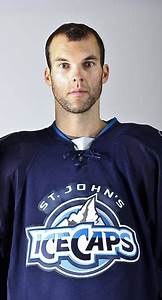 Jason King played his first game of minor hockey at the age of four, and he’s been a part of the sport at one level or another ever since.

Playing his entire minor hockey career in his hometown of Corner Brook, Jason joined the Halifax Mooseheads of the Quebec Major Junior Hockey League for the 1999-2000 season.
After he scored only three goals and tallied 10 points in 53 games during his rookie season in Halifax, few in the Mooseheads’ organization realized they had a budding superstar on their hands. But, during the 2000-2001 season, Jason caught fire – leading the team in scoring with 89 points in 72 games.

It was following that season the Vancouver Canucks made him their seventh-round pick in the 2001 NHL Entry Draft.

But, before turning pro, Jason had more to prove at the Major Junior level.

During his final year in ‘The Q’, he not only led the Mooseheads in scoring again with 99 points in just 66 games, but his 63 goals that season led the entire Quebec League.

Jason turned pro at the start of the 2002-03 season, splitting his time between the Vancouver Canucks, and their American Hockey League affiliate in Winnipeg – the Manitoba Moose.

He spent two seasons with Vancouver, often sharing a line with brothers Henrik and Daniel Sedin. Jason scored 12 times in 47 games that season, and the success of the partnership with the Sedins led to the Vancouver media dubbing them ‘The Mattress Line’ – two twins and a King.

Jason spent the next three seasons with the Moose in Manitoba before a contract dispute with the Canucks prompted him to play in the Swedish Elite League during the 2006-07 season.

After Vancouver traded his rights to the Anaheim Ducks in 2007, Jason returned to North American pro hockey and split that season between the Ducks and their AHL affiliate, the Portland Pirates.

Jason returned to Europe in 2008; playing three seasons in the German Elite League before returning to his home province to wrap up his playing career, spending two seasons with the St. John’s IceCaps of the American Hockey League.

And, while he hung up the skates following the 2012-13 season, his professional hockey career was far from over.

At the start of the next season, Jason moved behind the bench as an assistant coach with the IceCaps for two seasons before joining the AHL’s Utica Comets in the same role where he remained for four years before getting the call back to the NHL – joining the Vancouver Canucks coaching staff in 2020; a position he continues to hold.