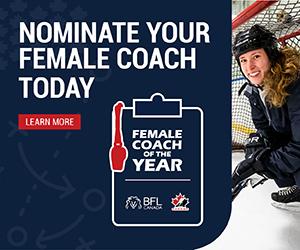 The BFL Coach of the Year Awards recognize and honour coaches who exemplify the positive values of hockey and sport, for their successful and outstanding achievements in player development and the leadership of their players and teams.

The individual submitting the nomination should complete the online nomination form and should also include a covering letter of support (not to exceed 300 words). As well, the supporting materials will include testimonials as to why the individual should be considered.

Selection of all provincial award winners will be made the Members.  The National community, competitive and high-performance coaches will be selected by the BFL Female Coach of the Year Selection Committee. The Selection Committee and the Members reserve the right to contact the participants on the team and/or others deemed appropriate prior to the final decision.

For more information or nominate a coach, please CLICK HERE.