Grand Falls-Windsor, NL – The Southern Shore Breakers captured their 6th Herder Memorial Championship title after they shutout the Clarenville Caribous 3-0 on Saturday, April 23rd, at the Eastlink Event Centre. The Breakers took an early two goal lead in the first period, with goals from Andrew Brennan and Andrew Gale. They would add another marker in the third courtesy of James Cadigan to help solidify the game and series win. Mark Yetman recorded the win in goal for the Breakers with a 21 save shutout. The Breakers swept the Caribous in four games, outscoring them 19-7 over the course of the series.

Keenan Kennedy of the Breakers was awarded the Cliff Gorman Memorial Award as MVP of the Herder Finals. 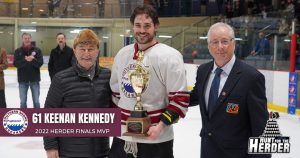 For complete details on results and statistics CLICK HERE