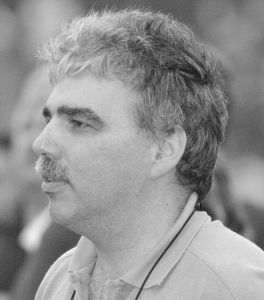 A British Columbia native, who was raised in New Brunswick, Brendan McCarthy arrived in Newfoundland and Labrador in 1984 after accepting a news reporter’s position with Q Radio.

He remained in St. John’s radio for over five years before joining The Telegram in 1991 as its lead hockey writer, covering the newly arrived St. John’s Maple Leafs and the American Hockey League.

Since the Leafs’ arrival in 1991-92, McCarthy has covered the AHL (including the St. John’s IceCaps), the Quebec Major Junior Hockey League’s St. John’s Fog Devils and, currently, the ECHL’s Newfoundland Growlers.

In addition to his work with the newspaper, McCarthy provided colour commentary on Maple Leafs’ and Icecaps’ home and away games with fellow Hall of Famers and play-by-play men George McLaren and Brian Rogers on VOCM Radio.

McCarthy was also a regular contributor to AHL coverage on Rogers TV, and prior to that, Cable Atlantic. He was a 1998 winner of the James H. Ellery Award for outstanding coverage of the AHL.

In addition to the pro game, McCarthy is also a regular contributor to The Telegram’s coverage of local hockey, including the widely read Newfoundlanders Away weekly stats package.

He is also a published author, having penned ‘Forward Thinking: The Danny Cleary Story’ in 2008.