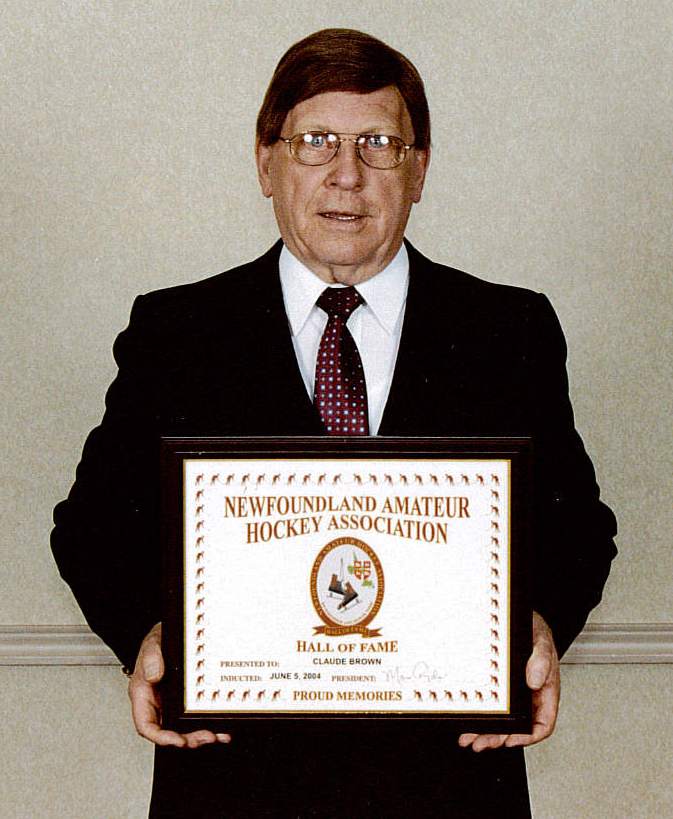 For 20 years hockey within Newfoundland and Labrador, especially within Gander, was much better because of the tremendous contributions of Claude Brown. Diligent work and effort, supreme leadership and dedication, an impressive willingness to make sacrifices and an outstanding determination to have a successful operation, were the trademarks of Brown’s work for hockey and for his community.

Always demonstrating a great personal love for Gander and things that were good for the town, Brown first became involved with the community’s hockey organization as a member in 1956 and served extremely well under then Association chair, Eric Dawe, for five seasons. Assuming more and more responsibility, especially with fundraising projects, Brown was the natural choice to succeed Dawe in 1970.

Both clubs, thanks in great measure to Brown’s leadership and work, were always competitive and thus the major attractions at Gander Garden and in every hockey facility in which they played all over the province.

The overall manner in which the Gander Flyers, senior and junior, were operated was a very important aspect of the financial success of Gander Gardens and certainly developed a great tradition and extremely evident pride for Gander residents. For seven or eight months every year the Flyers added greatly to the town’s reputation, thanks in great measure to Brown and the excellent people he attracted to the hockey organization.

Working in a calm, cooperative fashion, always taking the welfare of others into consideration and reacting to players and fans in a fair and unbiased, manner, Brown established himself as one of the best hockey individuals who contributed to the sport.

During his leadership of Gander hockey, Brown earned the respect and admiration of hockey people all over the province. This is particularly true of other operators of junior and senior teams at the provincial level. He was and certainly still is liked and admired for his endless hockey contributions.

Brown is credited with playing very, very important roles in the organization of a series of Hockey Newfoundland and Labrador meetings, annual and otherwise, in Gander. He was honoured with a special plaque from provincial junior hockey and in recognition of his great contributions to Gander sport, especially hockey, and has also been inducted into the Gander Sports Hall of Fame.