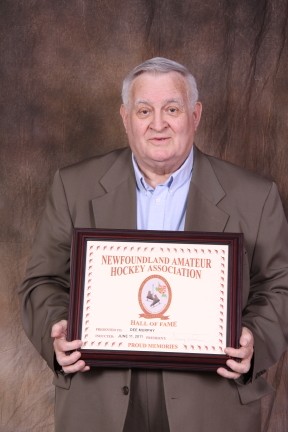 Dee Murphy has covered every level of hockey in every area of the province, and in some cases outside the province, for 50 years. He was a sports editor and sports writer with the Daily News, the Newfoundland Herald and the Telegram, a TV color commentator with CJON and Cable Atlantic and a sports announcer including hockey coverage with CJON radio. His coverage involved players and teams from pee wee to senior from all over Newfoundland and Labrador.

He was involved with a large number of hockey events as PR Chairman, including the 2004 World Under 17 Championships and with 12 Annual Confederation Cup High School Invitational Hockey Tournaments. He played a major role in the development of the hockey museum that included a hall of fame wall at the Pepsi Center in Corner Brook.

He has provided bios and press releases for the Provincial Hockey Hall of Fame for more than ten years and has submitted 17 successful nominations for the hall.

As a goal keeper he played St. John’s High School, junior and senior hockey and was a member of the St. Bon’s team that won the 1955-1956 St. John’s Junior Hockey Championship.