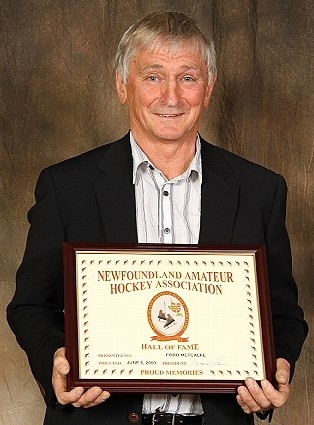 The finest athlete to ever come out of Conception Bay South, Ford Metcalfe enjoyed a nine-season provincial senior career that equals the vast majority of players within Newfoundland and Labrador hockey.

The manner in which he conducted himself on and off the ice and the great skill he displayed in every game in which he played were vital aspects of encouraging boys and girls, men and women to become fine hockey players.

Since there was no school or minor hockey in Conception Bay South during his younger years, Ford Metcalfe was forced to play his starting hockey on ponds and lakes prior to moving into the St. John’s Junior League as a member of the Guards.

He won the league scoring title in his first season, 1966-67 and continued to play top level local hockey with Guards in the St. John’s Senior League.

As a member of the St. John’s Capitals during his nine-year senior career, he was a vital factor in St. John’s winning three Herder Memorial Trophies and three provincial senior hockey titles. Always among the Capitals’ top point getters, he saw a great deal of service killing penalties and on the team’s power play.

He was an excellent senior hockey player who could score, assist, skate and hit, always demonstrating his exceptional desire to be a “team” player. Because of his great ability to perform with excellent efficiency defensively, he was often put on a line with two top offensive players.

In addition to his often amazing ability to back-check with the very best, he was very effective along the boards, in the opposing corners and behind the opposing goal.

His 215 games in the regular schedule of provincial senior hockey accounted for 98 goals, 89 assists, 187 points and 241 penalty minutes. He added 13 goals and 14 assists in Herder Trophy playoffs and scored one goal in the 1970 Allan Cup series.