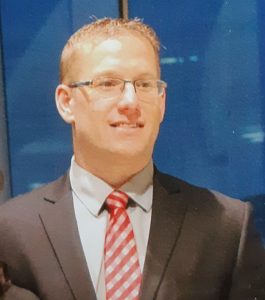 Mark Robinson was only 16-years-old and still in high school when he enjoyed his first taste of senior hockey in Newfoundland and Labrador, with the LaScie Jets of the Central Beothuk Senior Hockey League, where teammates included future Hall of Famers Juan Strickland and Ed Kearsey.

Following high school, Robinson headed to Nova Scotia and the Windsor Royals of the Nova Scotia Junior B league. He was the 1992-93 league rookie of the year after finishing second in league scoring (29-20-49 in 26 games).

The next season, he moved west again, to St. Catharines, Ont. and the Golden Horseshoe Junior Hockey League. He led the Falcons in scoring and was third overall in the league.

He returned home the following year and won the provincial junior championship with the Deer Lake squad.

Following his junior days, Robinson joined the senior ranks with Bay Roberts of the Avalon West circuit in 1996-97, led the Tigers in scoring and was named the league’s rookie of the year.

Since retiring as a player, Robinson has been busy coaching, specifically elite minor hockey teams. He’s guided Western bantam AAA and major midget teams to provincial titles, winning coach of the year awards in both leagues.