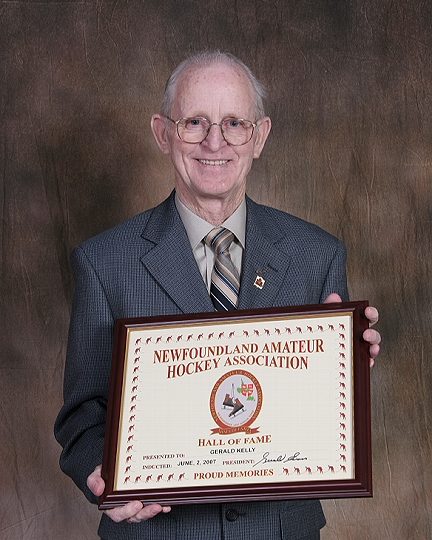 It is with great sadness that Hockey NL announces the passing of the late Gerald (Gerry) Kelly  on Saturday, August 14, 2021.

Gerry is a Life Member of Hockey NL, an honor that was bestowed on him for  exceptional and distinguished service to Hockey in the province.  He was inducted into the Newfoundland and Labrador Hockey Hall of Fame in 2007 as a builder and received the Gold Stick Pin in 1990 for his years of service on the Board of Directors of the provincial hockey association.  He also received the Hockey Canada Meritorious Award in 1995 and Hockey NL Meritorious Award in 2001.

Gerry will be remembered as serving over 20 years on the provincial minor council executive committee and solely responsible for the provincial grading report annually.  He was instrumental in the creation, development, and administration of minor hockey in his hometown of Conception Bay South from 1964 to 1979.

Gerry will be remembered for his quiet approach and the respect he gave to and received from the hockey community.  Gerry is the father of Hockey NL’s current President, Arnold Kelly. Hockey NL extends condolences to the entire Kelly family.

His legacy will remain with our association.

Information on funeral arrangements and obituary notice will be announced later.