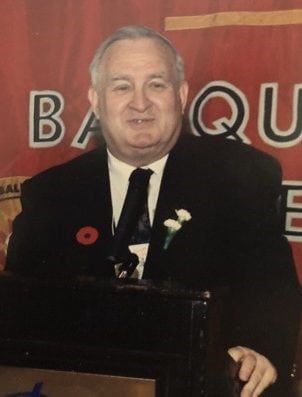 It is with great sadness that Hockey NL announces the passing of the late Dee Murphy.  Dee passed away at St. Clare’s Mercy Hospital Thursday, September 6.

He was chairman of the St. John’s Athlete of the Year Committee for 29 years, the St. John’s Mercantile Hockey League for 16 years and coached ladies softball and soccer teams for 25 years. The founding president of provincial softball, he played a major role in the establishment of Canadian Softball and was a member of its first executive and a previous honorary life member.  He served on the National Advisory Council for Fitness and Amateur Sport.  He was an individual who appreciated sport and sought recognition for anyone he felt deserving.

Resting at Carnell’s Funeral Home from 12 noon to 9:00 p.m. on Saturday, September 8th and Sunday, September 9th, 2018.  Funeral Service will take place at St. Teresa’s Church, Mundy Pond Road, on Monday, September 10, 2018 at 10:00 am.  Flowers welcome (although Dee thinks they are a waste of money) or donations may be made to the Canadian Mental Health Association NL Division, The Gathering Place or KidSport (NL Sports Federation).