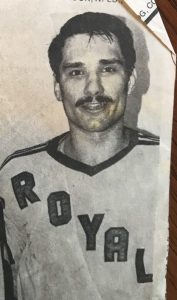 Tony Cuomo was an import hockey player brought to Newfoundland from Levack, Ont. by the Grand Falls Cataracts, and it did not take long for the move to pay dividends.

Cuomo finished amongst the Newfoundland Senior Hockey League’s top 10 scoring leaders in 1981-82, helping the Cataracts to the Herder Memorial Trophy, the first of three Herders Cuomo won during a seven-year career in Newfoundland.

Following his junior career, Cuomo headed east to St. Francis Xavier University, where he established himself as one of the best to play for the X-Men. A 1980-81 Atlantic Universities Athletic Association MVP, Cuomo is tied for 27th on the all-time AUAA/AUS scoring list.

Cuomo played two seasons in Grand Falls following his collegiate career, three with the Corner Brook Royals and wound up his senior career in Mount Pearl with two years on the Blades’ roster.

It was in Corner Brook where Cuomo found his greatest success, reaching the Herder final in 1983-84 before the Royals won the next two Newfoundland senior league championships. Cuomo finished in the top 10 in senior league scoring on three occasions, and during the Herder-winning years in 1985 and ’86, was third and second in Royals scoring.

Perhaps his greatest success was being a key part in the Royals’ Allan Cup win in 1986.

Following his retirement as a player, Cuomo settled in St. John’s where he was very active as a minor hockey coach.