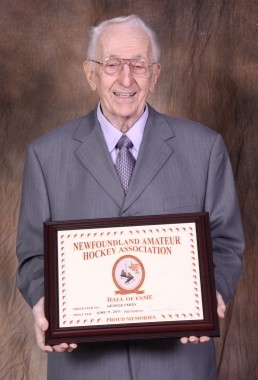 A tireless worker with outstanding dedication to hockey and a fair and unbiased approach to all aspects of the sport, he has earned universal respect from all those connected with the sport and the general public at large. Simply, George Fardy has been extremely important in the hockey scene since the early1960’s.

He played St. John’s high school hockey with St. Bon’s College where he went to school.

In the early 1960’s he began coaching within the minor hockey system operated by the St. John’s Royal Canadian Legion, and volunteered to manage the operation and equipment of the organization at the St. John’s Memorial Stadium for the 1969-70 season. That marked his start as an exceptional volunteer administrator and organizer. That same season he co-coached the St. John’s Pee Wee All-Stars with Otto Woodman. He continued coaching and became an executive member of the St. John’s Minor Hockey Association, taking over as its Chair in 1972 and moving onto the Provincial Minor Hockey Executive in 1975 and remaining there until 1979, as he was elected Provincial Minor Hockey Chair in 1980. He held the Minor Chair until 1986 and was elected Provincial Hockey President in 1986. He was Provincial President until 2000.

Circumstances dictated that he fill the Past-President position until 2010 and was Chair of the Selection Committee for the Newfoundland and Labrador Hockey Hall of Fame during that period.

Hockey within Newfoundland and Labrador is simply better because of George Fardy’s contributions.