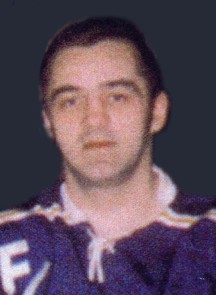 Born in Quebec, Jacques Allard ranks with the best players to ever play hockey in Newfoundland and Labrador. His career with the Gander Flyers was exceptional, especially as a tremendous offensive performer and as a coach and leader. Skilled and talented, he was an entertaining player who thrilled fans at every game in which he played.
He came to Gander in 1965 after three great seasons in the Nova Scotia Senior Hockey League where he won two scoring titles and owned a league record of 86 goals and 97 assists in one season. He continued his rapid scoring pace during his five seasons with Gander. His 544 points from 232 goals and 312 assists is eight highest in the history of provincial senior hockey.

A playmaker of supreme ability, Allard won three Newfoundland scoring crowns and averaged 109 points per season, which is a league record. His best production came in 1968 when he finished with 131 points from 62 goals and 69 assists. The first player to reach the 50-goal plateau, his 131 points was a league record that lasted 20 years. In addition, his 76 assists in 1969 was a record that stood for ten years.

It was his leadership as well as his expertise as a coach that played a major role in the first Herder Memorial championship by Gander in 1969. His approach to hockey was filled with talent but it included an attitude that was extremely beneficial to his teammates while his on-ice performance was such that it attracted fans and filled rinks. Jacques Allard was an excellent hockey player and leader.