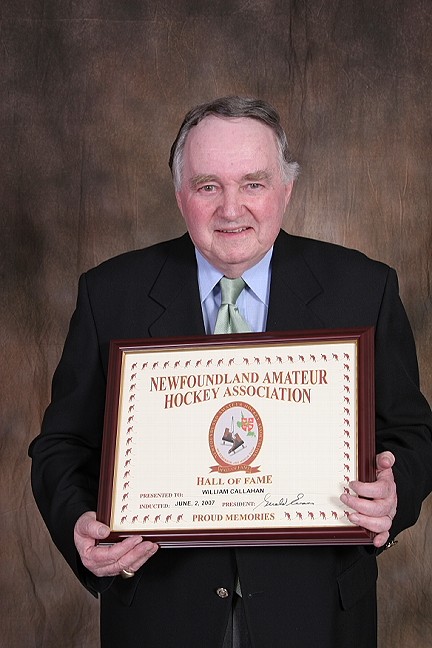 During most of the 1950’s and for a large portion of the 1960’s, Bill Callahan was a very beneficial influence on the growth and expansion of hockey throughout Newfoundland and Labrador. As a newspaper sports reporter and editor, as a radio and television sportscaster and especially as a hockey play-by-play announcer for both radio and television, he earned a great personal reputation for the high-class manner in which he performed.

He started his sports reporting career in 1948 with the Western Star and continued reporting sports, especially hockey and the City’s Royals, until he moved to St. John’s in late 1953. He became CJON’s sports director when the St. John’s Memorial Stadium opened in 1955 and, in addition to three sportscasts daily on the radio and television networks, took over from the great Don Jamieson as the station’s hockey play-by-play announcer.

An exciting play-by-play announcer, Callahan had the privilege of calling the first hockey game ever televised within the province, doing a St. John’s Senior League game between St. Bon’s and Guards.

Owner of exceptional expertise covering players, coaches, teams and officials as well as the game itself, Callahan played a major role in the great interest and enthusiasm that hockey generated all over Newfoundland and Labrador. He is mainly responsible for the early hockey film and tapes that NTV has in its archives from which the video for the provincial hockey hall of fame was made.

His radio support of hockey, through three daily radio sportscasts province wide on CJON, provided great information and important support for hockey and also for a wide range of other local sports.

Bill Callahan’s in-depth knowledge of hockey, at the provincial level and at the local level in Corner Brook and St. John’s, formed a solid base upon which he developed impressive coverage of all hockey, but particularly provincial senior play for the Herder Memorial Trophy.

He was very well acquainted with players, coaches and managers in every NAHA community and had a continuous favorable relationship with hockey executives and sponsors. He knew hockey and demonstrated his respect and regard for the sport by the manner in which he reported it.