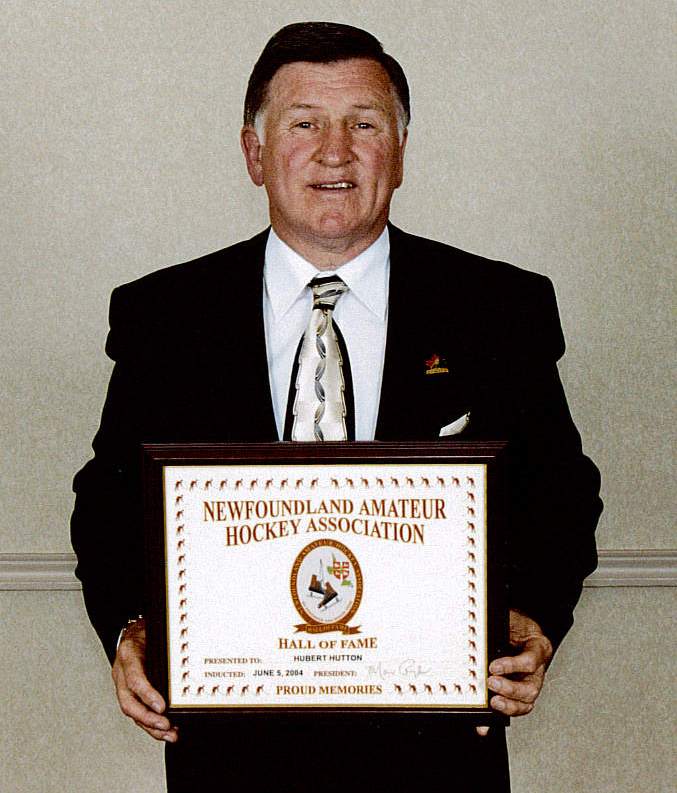 A fast, free-wheeling skater with a tremendous shot, Hubert Hutton continuously displayed his great love of hockey and his obvious enjoyment of the game in a lengthy career that stretched from his minor days to his recreation hockey era, at 60 years of age. Hockey and Hubert Hutton simply went together.

His uniqueness is such that he played provincial senior hockey for 33 years, from 1962 to 1995. In his final Herder Memorial Trophy game, at the age of 55, he scored a goal. The length of this aspect of his career is a clear demonstration of the talent and love he brought to hockey.

Colorful and energetic, he was always a fan favorite with an enthusiastic style of play that often dominated play as he utilized his great skating ability to perfection and was a defenseman who was equally effective on defence as on offense. His exceptional skating prowess earned him permanent assignment on power plays and in penalty killing. He was a multi-skilled player who contributed much to any team of which he was a member.

Hubert Hutton’s hockey career started as a St. John’s peewee all-star in 1955 and even at that young age he displayed the impressive characteristics that were to continue during his complete hockey time. As a peewee he represented the province in national competition.

Volunteering as a stick boy for the St. Bon’s senior team on which his brother Noel played, he enjoyed outstanding success in St. John’s school hockey with St. Bon’s. He earned a Most Valuable Player award and was a major factor in the championships that the school team won. During this era he established himself as a great hockey player. In the St. John’s Junior Hockey League he won another Most Valuable Player award in 1961 as a member of the St. Bon’s entry and earned a spot on the St. John’s Caps who were striving for the Veitch memorial Trophy and the provincial junior title.

His provincial senior accomplishments are very, very impressive as he was a member of nine teams that won the championship and the Herder memorial Trophy. One title came with Mike’s Shamrock’s and eight others came with St. John’s Caps. All eight titles were accomplished with Hubert Hutton as an important contributor.

In 1976 he was voted the player best combining sportsmanship and ability and won the Barry Clouter Memorial Trophy. On six occasions, he was a member of a team that represented Newfoundland and Labrador in national Allan Cup play.

Even playing defence he was able to finish runner up to one provincial senior scoring title and stands among the very highest scoring defenseman in the history of the competition. Many goals and assists were generated by booming, hard slap shot from the blue line while others were simply the result of excellent stick handling and passing.